Press enter to begin your search

Our fitness training program is structured in terms of substance and proficiency. We evaluate each player individually in order to evaluate their physical development weaknesses to carefully customize their training programs based on their level of play and tournament schedules.

We accurately evaluate the flexibility movement and the instantaneous formulation response levels with using a heart rate monitor to track the physical adaptability and adjust the program according to the players fitness progress. 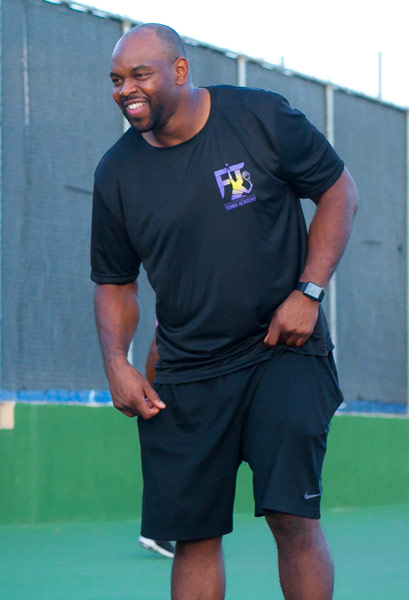 Raynald Ray has had the values of fitness and physical activity instilled in him at an early age. He first excelled in Tae Kwon Do, which he started at the age of 4. Raynald eventually became ranked in the top 30 in the sport. When he entered middle school he picked up organized sports such as Football, Basketball, and Track. His introduction into those sports lead to him receiving a full D1 scholarship to Ohio University in football and running on the track team. While attending Ohio University he set school records for single-season and career punt return yards. Raynald also was all MAC, Vern Smith leadership award recipient, ABC player of the game vs. Ohio State, ranked 10th in the nation for all-purpose yards, and 12th in the nation for punt return yards.

In 2002, Raynald graduated with a degree in Exercise Physiology. Soon after returning to San Antonio, he obtained his NASM-certified personal training cert. Raynald then started a career in fitness which has been ongoing for thirteen years. During that time his passion for martial arts was pursued in the disciplines of Muay Thai and Jiu Jitsu. Raynald has since won third place in the Abu Dhabi pro in 2011 and soon after became a World Champion in Jiu Jitsu in 2012. During that time Raynald was still in pursuit of continuing his education and has achieved certification from: NCCPT, NASM-prenatal, NASM-performance enhancement specialist, NASM-cardio sports performance, NASM-flexibility specialist, and TRX training. In 2011 Raynald became a strength and conditioning coach for tennis and has helped in the development of players of varying levels up to D1 tennis players. He also has developed programs for professional Basketball, Football, and MMA athletes. Raynald is currently the strength and conditioning coach at Fit High Performance Tennis Academy.